If you'd like to speak to an expert about selecting the right diamond for you, please call:

In African folklore it says that Tanzanite helps to relax and slow down intense individuals who deal with pressure on a regular basis, allowing them to lead less stressful, more productive, healthier lives. This keeps them more organized and sensitive to others around them.

"It is believed that the coming of this stone to the surface of the planet heralds a tremendous awakening of the heart energies of the race of man."

Tanzanite acts as an elixir to one's soul; elevating one's mood and freeing one from negative habits. It restores balance to an individual by making one not overly bossy and demanding, yet at the same time ensuring that one is not taken advantage of. The belief is that owning Tanzanite will bring luck and fortune to its bearer.

To a few, these beliefs may appear to be wacky alternatives dreamt up by hippies, or perhaps just another marketing tool. In reality, the lore of gem and crystal healing has its roots in ancient practices that predate modern medicine by thousands of years. Two such ancient healing techniques, still very much in practice in countries such as India and Thailand today, are Litho-therapy and Crystal Healing.

Tanzanite is the crystalline form of the mineral zoisite and is an exquisite violet-blue gemstone. It is a very rare gemstone. The zoisite crystals form in the presence of vanadium, which is a soft, grayish-silvery metal. Its crystal structure is orthorhombic and it is Trichroic, radiating three different colors from three different crystal axes.

Where Does Tanzanite Come From?

Tanzanite is found in only one place in the entire world, Tanzania, in the foothills of Mt. Kilimanjaro. The area in which it is found covers only 4 square kilometers.

How Rare Is Tanzanite?

Considering that Tanzanite can only be found in a 4 kilometer square area and that the top quality colours and sizes are becoming harder and harder to extract from the ground it is very rare and becoming rarer. Tanzanite is in fact considered to be a thousand times rarer than Diamonds.

What Is The Origin Of Tanzanite?

Tanzanite was discovered in the mid 1960's in the Merelani Hills of East Africa by Massai tribesmen after a bush fire had heated the rough Tanzanite changing it to the stunning intense violitish, blue colour that we know. 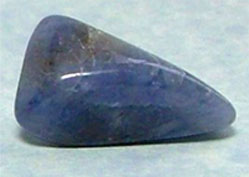 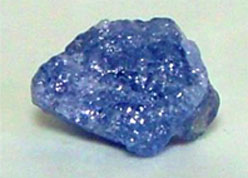 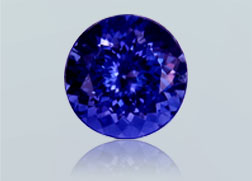 
What Is The Composition/Hardness Of Tanzanite?

Tanzanite is a hydrous Calcium-Aluminum Silicate with a hardness of 6.5 on the Mohs scale.

This means that Tanzanite's hardness is similar to emerald but a bit less brittle and should be cared for. It is not as hard as diamond which rates as 10 or sapphire which rates as 9 on the Mohs scale but harder than steel which rates about 4-5. Therefore Tanzanite should not be worn during activities that may cause impact. Ideally it is set as a necklace, dress ring, earrings or occasionally a bracelet. - back to questions

How Popular Is Tanzanite?

Tanzanite is the most exciting gemological find of the 20th century and has enjoyed immense popularity, especially in the States, where approximately 70% of tanzanite is sold. During 1997 and 1999, tanzanite was second only to sapphire in US sales of coloured gemstones.

How Much Does Tanzanite Cost?

The price of tanzanite in the past has varied considerably due to unstable supply. However, at the moment consumers can expect to pay between US$700 and US$2000/carat for legitimate, certified, top grade “Triple A” Intense Violetish Blue Tanzanite, depending on colour, cut, carat and clarity.

Tanzanite is approximately a third of the price of Sapphire. 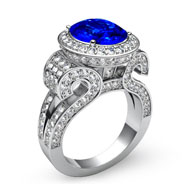 How Do I Know That My Tanzanite Is Genuine?

Whenever you are buying Tanzanite you should make sure that it has been graded by an Independent Gemological Laboratory (not a laboratory controlled by the vendor) and comes with a certificate.

How Is Tanzanite Graded?

Tanzanite like all other semi precious and precious gemstones is graded in independent gemological grading laboratories. The top grade of Tanzanite is "Intense Violetish Blue" or "Triple A".

All Tanzanite is heated to 500 degrees centigrade. This transforms it from its original dull brown colour to the beautiful and sort after Intense Violetish Blue. Totally accepted in the trade as it is irreversible.

Is All Your Tanzanite Graded?

We only touch Tanzanite that has been graded by an Independent Gemological Laboratory.

Is It A Fact That Tanzanite Is Becoming Rarer?

Absolutely, Tanzanite is already one thousand times rarer than Diamond and given that it is only 6.5 on the Mohs scale, many pieces are accidentally destroyed. The fact that it is formed by a unique geological phenomenon, that has less than a million to one chance of being repeated, means that according to geological tests, the world’s supply of Tanzanite will be totally exhausted within 10 to 15 years.

How Do I Care For My Tanzanite?

Given the not so hard nature of Tanzanite, it is recommended that a soft cloth and warm soapy water is used to clean it in a gentle and controlled manner.

Under no circumstances should an ultra-sonic cleaner be used.

Is It Likely That Tanzanite Will Ever Be Discovered In Any Other Part Of The World?

Intense geological research has found that there is only one source of tanzanite and it’s geology is totally unique. It is a “geological phenomenon” with the chances of another occurrence outside of the current production area and its immediate vicinity being less than a million to one.

Does Tanzanite Have Any Special Meaning Or Properties?

Tanzanite is the first Gemstone to have been added by the American Gem Trade Association to the list of Birthstones since 1912 and is now an official Birthstone for December.

The Massai Tribesmen give it to all their newborn children as a bearer of good fortune.

It is also said to have many mystical and healing powers. It uplifts and opens the heart. It is a gemstone that shows us a graceful, gracious way to live.

It is said that people who wear it feel spiritual power pulling them up. It also encourages the wearer to help others because it helps them realize that their own individual truth is connected to eternal truths and the two would sustain each other. They are well grounded in truth, nature, and spirituality.

Also it activates the throat chakra for clear communication of one's highest truth and can also be used to enhance psychic abilities.

Is Tanzanite A Good Investment?

Tanzanite, given it’s desirability and rareness, coupled with it’s dwindling supply makes it one of the surest investments of our time.

5 Things You Should Know Before Buying Tanzanite

2. Size : Large peices of tanzanite are exceptionally rare, and therefore command very high prices. A tanzanite over 3 carats is hard to find and very expensive.

3. Clarity : After color, clarity is probably the most important factor in tanzanite. Lower quality, lower priced tanzanite will have many internal flaws, or inclusions, inside it. Perfectly clear tanzanite is hard to find and priced accordingly.

4. Cut : When the color and clarity of a tanzanite are of high quality, a good cut will make the difference between a nice stone and a once-in-a-lifetime stone.

5. Treatments, Synthetics and Imitations : Tanzanite often goes through some kind of labratory treatment and is also sometimes imitated. Tanzanite is also sensitive and requires care when handling.

The Most Valuable Tanzanite

The most valuable tanzanite is bright blue with violet pleochroism (as you turn the stone in the light, you see flashes of violet). It is large (over 3 carats), perfectly clear and perfectly cut.

Lowest Value : These tanzanite beads are of poor clarity: that is why they had to be made into beads. They are also quite small. Their best feature is their strong, purplish color.

Low Value : These tanzanite are “gem quality” because they are clear enough to be faceted. However, they are also small. Their color is weak and the cut is poor: we can see through the stone and their is not much sparkle.

Medium Value : This tanzanite has an excellent color which makes it quite valuable. It is well cut. It’s main detractor is its very poor clarity.

High Value : This tanzanite is very valuable, mostly for it’s intense purple-blue color and its very large size (over 7 carats). It is also very clear. The cut could be better, but even as it is, this is a “top” tanzanite gemstone.